Voting by mail and absentee voting

Absentee voting and balloting by mail have generally been viewed as synonymous in the United States because historically, absentee ballots were distributed by mail to voters temporarily away from their homes, and no one else was typically allowed to use this mode of voting. For this reason, both topics are considered together in this explainer. Figure 1 shows the percentage of voters who cast their ballots since 1992 through the three major modes of voting—in person on Election Day, in person before Election Day, and by mail/absentee. The statistics are based on self-reports by respondents to the Voting and Registration Supplement of the Current Population Survey (CPS). The data for 2020 are based on responses to the Survey of the Performance of American Elections.

The rise in voting by mail (VBM) raises a number of important academic and policy issues. Do liberal vote-by-mail policies increase turnout? Does an increased rate of voting by mail decrease civic engagement, or decrease the impact of an “October surprise,” that is, an event at the end of a political campaign intended to affect the outcome? How does the processing of voting by mail impact when we know the winners of an election?

The idea that ballots could be cast anywhere other than a physical precinct close to a voter’s home hasn’t always been embraced in the United States (and still isn’t in many other countries). What we in the U.S. now call absentee voting first arose during the Civil War, when both Union and Confederate soldiers were given the opportunity to cast ballots from their battlefield units and have them be counted back home.

The issue of absentee voting next became a major issue during World War II, when Congress passed laws in 1942 and 1944 related to soldiers stationed overseas. Both laws became embroiled in controversies over states’ rights and the voting rights of African Americans in southern states, so their effectiveness was muted. Subsequent laws, particularly the Uniformed and Overseas Citizens Absentee Voting Act (UOCAVA ) and the Military and Overseas Voter Empowerment (MOVE ) Act, have been more effective in encouraging voting by service members through absentee voting.

States began passing absentee ballot laws for civilians in the late 1800s. The first laws were intended to accommodate voters who were away from home or seriously ill on Election Day. The number of absentee ballots distributed was relatively small, and the administrative apparatus was not designed to distribute a significant number.

In the 1980s, California became the first state to allow eligible voters to request absentee ballots for any reasons at all, including their own convenience. By 2020, 29 states adopted no-excuse absentee laws. Figure 2 classifies states according to their absentee/mail ballot regimes. According to statistics in the 2018 Election Administration and Voting Survey (EAVS), 26% of voters in no-excuse states cast their ballots by mail, compared to 9% in states that still required an excuse. 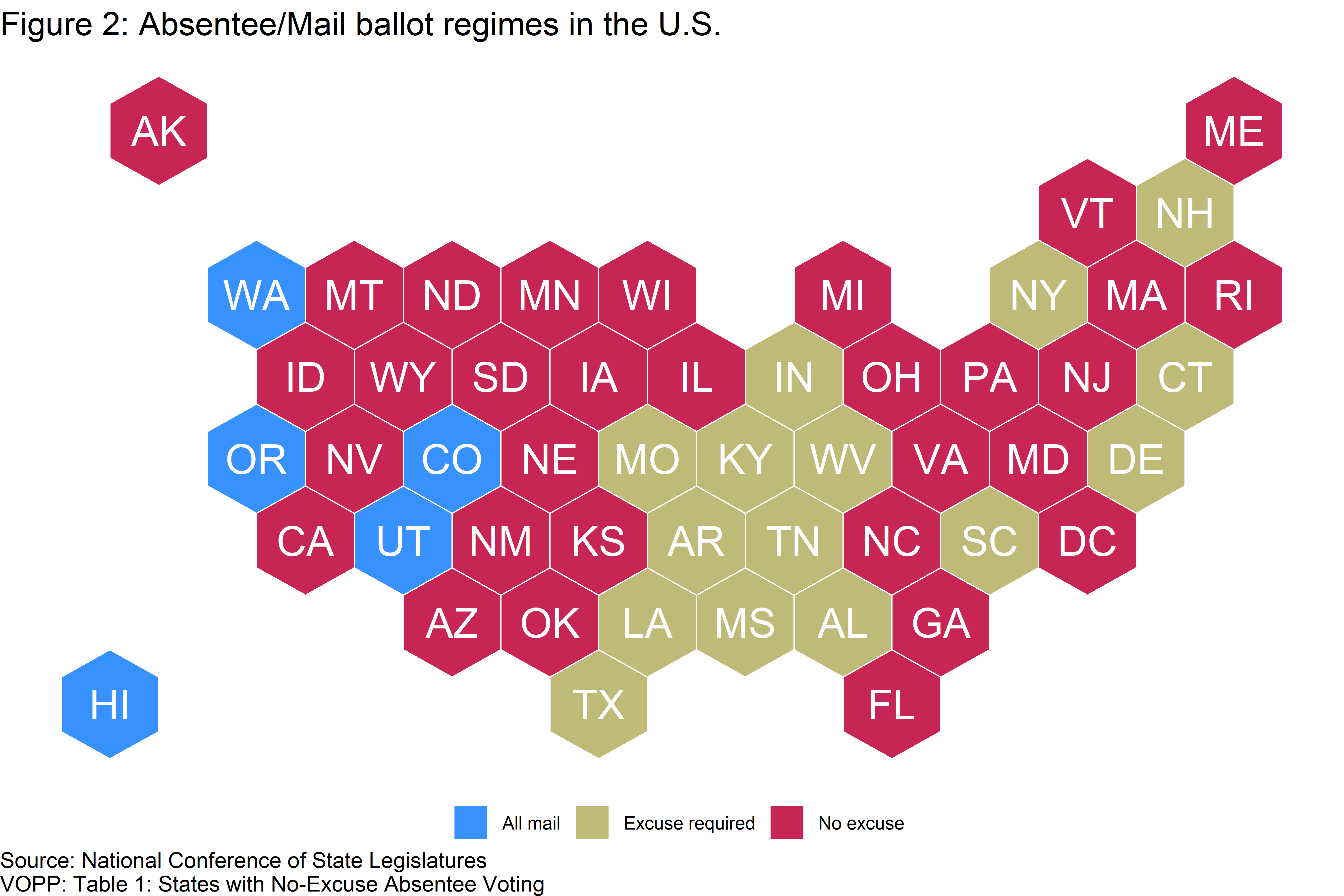 The next wave in expansion of voting by mail occurred during the 2020 election season, in which many states temporarily altered their absentee/mail ballot laws to grant greater access to mail balloting during the COVID-19 pandemic.  The result was the significant increase in voting by mail for 2020 reflected in Figure 1.

In a referendum that passed in 1998, Oregon went a step further by agreeing to issue all its ballots by mail. Washington followed suit in 2011 and Colorado in 2013.  More recently, these states were joined by Hawaii and Utah, which passed laws to begin voting by mail on a permanent basis with the 2020 election.  California, D.C., Nevada, New Jersey, and Vermont mailed ballots to all voters in 2020, as a COVID-related adaptation. (Montana allowed counties to decide whether to mail ballots to all registered voters in their county.)

It's important to note that although Colorado, Oregon, and Washington now distribute all their ballots by mail, voters do not return them all by mail. According to responses to the 2020 Survey of the Performance of American Elections , 91% of voters in Colorado, 71% in Oregon and 70% in Washington returned their ballots to some physical location such as a drop box or local election office. Thus, it's more accurate to describe these states as “distribute ballots by mail” states.

The expanding opportunities to cast an absentee ballot or to vote by mail have not been uncontroversial. Perhaps the most important issue has been whether expanding VBM opportunities increases voter turnout, and concerns over electoral integrity. Facilitating VBM presumably reduces the costs of voting for most citizens, so one would expect it to increase turnout.

The scientific literature on this empirical question about turnout has been mixed. An early study of the effects of VBM on turnout in Oregon argued that its implementation had caused turnout to increase by 10%. However, subsequent research has had difficulty replicating these initial findings. More recent research, using a variety of quasi-experimental methods, suggest the causal effect of VBM in these states in presidential election years is around 2 percentage points, although it may be as high as 8 points in Colorado.

The safest conclusion to draw is that extending VBM options increases turnout modestly in midterm and presidential elections but may increase turnout more in primaries, local elections, and special elections. This modest increase likely comes in two ways: by bringing marginal voters into the electorate and by retaining voters who might otherwise drop out of the electorate.

Another question surrounding VBM is whether it increases voter fraud. There are two major features of VBM that raise these concerns. First, the ballot is cast outside the public eye, and thus the opportunities for coercion and voter impersonation are greater. Second, the transmission path for VBM ballots is not as secure as traditional in-person ballots. These concerns relate both to ballots being intercepted and ballots being requested without the voter’s permission.

As with all forms of voter fraud, documented instances of fraud related to VBM are rare. However, even many scholars who argue that fraud is generally rare agree that fraud with VBM voting seems to be more frequent than with in-person voting. Two of the best-known cases of voter fraud involving absentee voting occurred in 1997 in Georgia and Miami . More recently, a political campaign manager within North Carolina’s ninth Congressional district defrauded voters by collecting unfilled ballots and then filled in the rest of it to favor the campaign’s candidate, leading to a new election.

Finally, skeptics of convenience voting methods such as VBM argue that they encourage voters to cast their ballots before all the information from the campaign is revealed, thus putting early voters at a civic disadvantage. In response, it can be argued that as more voters cast early ballots by mail or in person, campaigns have less incentive to hold onto negative information about their opponents in the hope of gaining an advantage through an October surprise. Empirically, it's important to note that the earliest voters tend to be the strongest partisans, and thus are less likely to be swayed by last-minute information.

Keyssar, Alexander. 2006. The Right to Vote: The Contested History of Democracy in the United States. New York: Basic Books.

National Conference of State Legislatures | Voting Outside the Polling Place: Absentee, All-Mail, and other Voting at Home Options